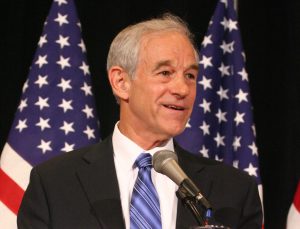 The “old rules” always apply, according to Ron Paul, who is convinced that a drastic correction is coming and could hit the market as soon as October.

“If our markets are down 25% and gold is up 50% [in October], it wouldn’t be a total shock to me,” former congressman and two-time presidential candidate Ron Paul told CBNC’s Futures Now.

The biggest triggers traders are concerned about include the Fed’s agenda as well as Trump’s ability to pass the promised reforms.

“The markets are very nervous for a good reason. They don’t know what to expect. It’s unpredictable what the Fed will do, but it is also unpredictable how the markets will react,” Paul said.

He added that Nasdaq, the dollar and bonds are already looking shaky.

“It is a very precarious market, and the Fed better be very careful. Since they are incapable of knowing what to do. They cannot anticipate. They haven’t been right on most of their projections in their planning. I’m not thinking that the bubble atmosphere and the wonderful things going on on Wall Street will last forever. I think it is coming to an end,” he noted.

If Trump fails to pass his vital reform measures it will negatively affect the market by October, Paul explained, noting that the stock rally will not last.

“People have been convinced that everything is wonderful right now and that stocks are going to go up forever. I don’t happen to buy this. The old rules always exist and there is too much debt and too much mal-investment. The adjustment will have to come,” he said.